How to tell a patient's sex from their neutrophils! 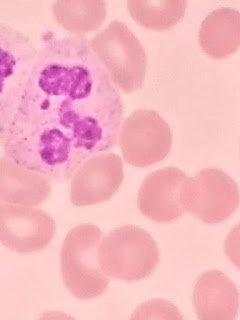 Look at this neutrophil. Can you see a drumstick (or as I call it chicken leg!) protruding from the nucleus? This actually represents the inactive X chromosome and tells us therefore that this patient is female!

Females have two X chromosomes (XX), whilst males have one X and one Y (XY).  FISH analysis has shown the active chromosomes, whether X or Y to be randomly distributed along the nuclear lobes of the neutrophil, whereas the inactive X chromosome is usually located in the end lobe of the nucleus . (Karni, Wangh and Sanchez, 2001).

Sessile nodules which are small bumps protruding from the nucleus, also represent inactive X chromosome and again are found at the terminal end of the neutrophil nucleus. 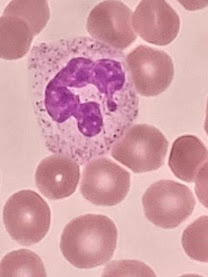 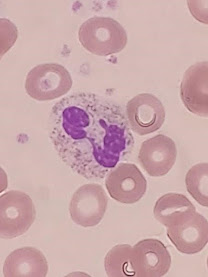 It is possible for a  male to have these drumsticks or sessile nodules in Kleinfelters syndrome, which makes sense as here the male has an extra X chromosome (XXY). I've learnt that a female may lack drumsticks in Turner’s Syndrome (XO) as lacking an  X chromosome .

It is easy to mistake the inactive X chromosome for other nuclear projections such as ‘racket shaped’ protrusions, smaller nuclear lobes and other projections. These have  a similar appearance to the drumsticks but may be a different size and do not have the same significance. Abnormal nuclear projections can also be seen in Haematological disorders such as MDS and CMML. 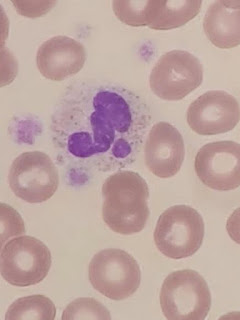 This is a smaller lobe in the nucleus, not a drumstick as it's too big.

It takes experience recognising a sessile nodule or drumstick from other nuclear projections, but i've learnt that knowing their location on the terminal lobe of the neutrophil nucleus and looking at size are  good places to start!